There once was a mysterious pharaoh named Osiris, and his wife Isis. They once ruled Egypt together, and treated the lower classes like animals. For instance, the slaves had labor 12 hours each day 7 days a week. The powerful Osiris and Isis lived in Lower Egypt, in their very fancy temple of Isis,  which was as humongous as 100 elephants! One day, Isis was screaming to Osiris how mean to the people they have become.

“No! I will not let this happen! They must bow to us and we have to make them work like dogs! Honey, you do not understand we are gods and we must act like them!”,said Osiris

“Yes I know that we are gods (obviously) but what I’m trying to say is to give them less work. 12 hours is impossible for me even! My sister is a slave and she hates it and she told me she hates you!”, replied Isis

“Oh sweetie, oh Isis, would you like me to choose to remarry? Or will you be as silent as a mouse, Honey??”,exclaimed Osiris

“Ugh fine I’ll be quiet and no I would not like you to remarry, it was just a request as simple as a piece of cake.”

Two days later Isis was watching the slaves and her sister, Nephthys, has just reported to Isis that she just saw a slave escape! They figured out it was the naughty, envious Set, who is running towards the temple. Isis has stopped him just in time and he claimed that he wanted to say hello to his hardworking brother, Osiris. Set has just fooled her and now he ran inside the temple of darkness it was nighttime and he now has just murdered Osiris with fire! It was as hot as a stove! Now that he did this he has been sentenced to full-day work as a slave and he will never be able to escape because the next time he does he will be sentenced to death. The poor Isis has to take care of Egypt all by herself. She is as sad as a polar bear without shelter. She decides that she loves him so much she doesn’t remarry but she lives a happy life. 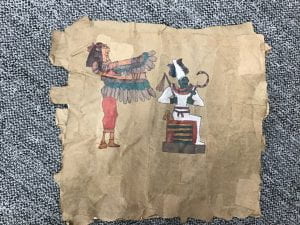